The ladies ended their very successful 40th anniversary year with a Grand Celebration Concert in Bethesda Chapel in Neyland.  The chapel was packed to the rafters - standing room only .  Compere for the evening, Brian Jobson, reminisced about the formation on the choir back in 1977 right up to the present day.  In the first half of the concert the choir sang songs that hold a special place in their hearts.  One of these was Sing a Song of Sixpence which was one of the very first pieces the choir learned 40 years ago when they were under the leadership of Ivor Thomas.  Following a beautiful solo by Glesni Edwards (a former choir member) the choir then sang a selection of their favourite Christmas songs and carols.  There was audience participation with bells being rung during the chorus of Dong Dong Merrily on High and a snowball fight in the singing of Winter Wonderland.  Following the standing ovation the whole audience were invited to join the ladies for refreshments in the Bethesda schoolroom.  This wonderful concert was thoroughly enjoyed by all who attended and raised the magnificent sum of £800 for the Paul Sartori Foundation. 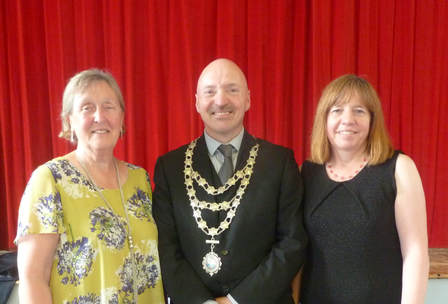 On Sunday 16th July the choir were delighted to be invited to to sing at the Civic Service for Cllr Dr Simon Hancock at St Clements Church in Neyland.  Dr Hancock has been the choir's President for many years and the ladies were honoured to be able to support him at this very important event.

Several members of the choir joined Neyland Carnival procession as part of the 40th Anniversary celebrations.

The ladies followed the concert in Haverfordwest with another concert at the Wesley Chapel in Saundersfoot to help raise funds for the Pembrokeshire Branch of Cancer Research UK.  The Wisemans Bridge Inn was chosen to have a well deserved summer dinner on 30th June.  The choir enjoyed an excellent meal and then followed this with a sing-song in the restaurant before heading back to Neyland.

The choir continued to celebrate their 40th anniversary with a joint concert at a packed St Davids and St Patricks RC Church in Haverfordwest on Saturday 3rd June.  Neyland Ladies were joined by Singing For Pleasure under the musical direction of Mark Heron.  Singing For Pleasure is a choir of ladies from WI groups in South East Wales.  There are 40 ladies in the choir which has been going for about 7 years.  35 members made the trip to Haverfordwest to take part in the concert. Their musical director Mark Heron was brought up locally and attended school in Haverfordwest. He has musical history with Lynne Kelleher, musical director for Neyland Ladies Choir.  They have performed together many times in the past and this concert was a wonderful opportunity for them to collaborate once again.  Mark, an accomplished flautist,  entertained the large audience with 2 lovely pieces for the flute – Cadair Idris (a traditional Welsh Folk Song) and Danny Boy (a traditional Irish air).  The concert concluded with the 2 joint items – Flying Free conducted by Lynne and The Lord Bless You and Keep You conducted by Mark.  The choirs would like to thank the very appreciative audience who helped to raise over £700 for the Paul Sartori Foundation and also the ladies of the church who provided very welcome tea and cakes in the church hall afterwards.

The choir were delighted to welcome Chorale Voix de Losa to Neyland for 3 days as part of the 40th anniversary celebrations.  The chorale are from Neyland's twin town of Sanguinet in South West France.  26th to 28th April 2017 were a very hectic few days for the choir and the visitors alike.  The visit began with a grand welcome and a fish and chip lunch at the Cleddau Bridge Hotel on Wednesday 26th April. The visitors then went to Pembroke Castle for the afternoon. There was no time to relax as there was then a short rehearsal at Neyland Athletic Club at 5.30pm followed by supper in the main hall.  Neyland Ladies, invited guests and the French visitors were royally entertained by the Flat Cappers and everyone enjoyed the music and the dancing until 11.00pm when the coach arrived.
The following day was spent visiting Tenby and St Davids and then both choirs sang at a joint concert in St Clements Church, Neyland in the evening.  The church was packed - standing room only.  Chorale Voix de Losa sing mostly a cappella and their choice of music was songs form the shows and spirituals.  The choirs joined together to sing Blue Moon and Oh Happy Day at the end of the concert.  The proceeds from a raffle on Wednsday evening and the concert were presented to Rev Alan Chadwick for St Clements Church Hall repair fund.  Both choirs then shared a late supper in St  Clements Church Hall and the visitors were presented with a daffodil badge that had been made by Jill Byrant (a choir member).  Following a farewell breakfast at Zion Chapel in Neyland on Friday morning the visitors headed off for Swansea before flying back to France on Saturday.

A great relationship has built up between the choirs and Neyland Ladies have already been invited to pay a return visit to
Sanguinet in 2018. 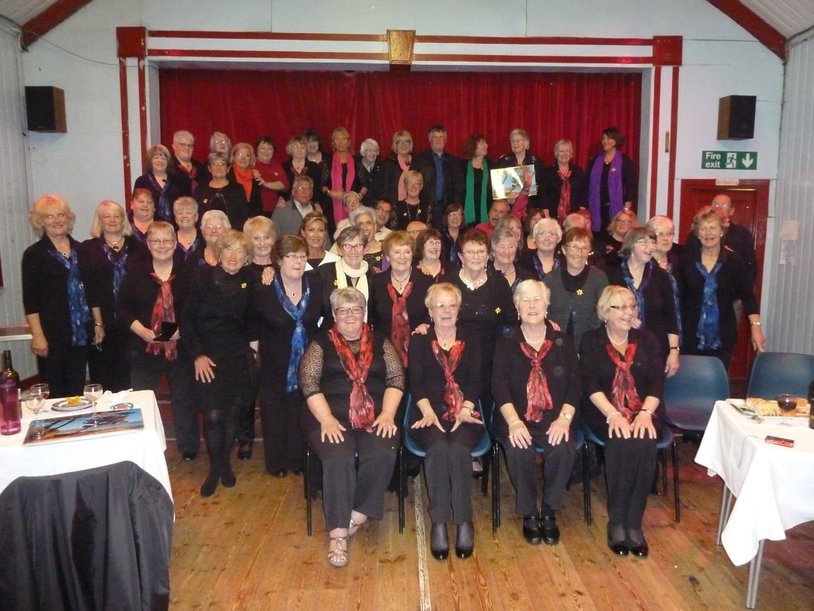